Goodness, it’s been a while. I suppose time flies when it’s your last semester of undergrad and you’re caught in the middle of job and internship applications and a thesis with zero motivation to do any of the aforementioned because Netflix has finally added every great cartoon from your early childhood to its instant selection.

Luckily for me and my lack of willpower, I got to take a break from academics, thesis-writing, and job-hunting (not the Netflix, of course, let’s not kid ourselves now) for a few days of non-stop baking.

Though, I suppose I have O to thank for that.

Aside from being absolutely lovely and warm-hearted beyond belief, O is quite the talented musician. (Go figure.) As part of her distinguished music major curriculum, O performed in a gorgeous joint-recital with a fellow violist earlier this afternoon, an event that I’d been looking forward to for quite some time now. With some degree of trepidation, to be honest.

Why, you ask? Well, O very graciously asked if I would be willing to provide small bites for the reception. I, of course, said ‘yes’ without hesitation, though it was a few days later, when mulling over the menu – three different treats, yielding 40-50 of each – that I realized that these really had to be spectacular. Not so much because they would be on full display for upwards of 50 pairs of eyes (though, this did cause a great deal of nervous excitement), but because I really wanted them to be perfect for O.

Three years of a solid friendship, after all, and if this was the last important thing I’d get to do for her, I wanted to make sure I did it right.

I had already decided on macarons and mini cheesecake tarts before these little guys, and wanted something a bit more cake-like to add some diversity. Lemon poppyseed bundt cakes came immediately to mind, as an alternative profoundly more elegant than a simple cupcake. Once the idea made itself known, there was no shaking it.

When it came time to move the desserts over to the venue – made possible by Michael and Zach’s great help and SUV – I whipped up a cup of almond glaze to pour over the cakes after set-up. They held up nicely, white sugar falling in ribbons between the furrows, a charming sight on doily-lined trays.

I, unfortunately, had to run straight to a teaching session about an hour into the recital, and ended up having to sneak out before it was over. But what I did have the pleasure of hearing was, of course, brilliant. Paul Hindemith, Mikhail Glinka, Ralph Vaughan Williams. I wasn’t around for the reception, but I figure, O would have texted me by now if something was dreadfully amiss.

At least I got to see O shine. And you know, that was more than enough. 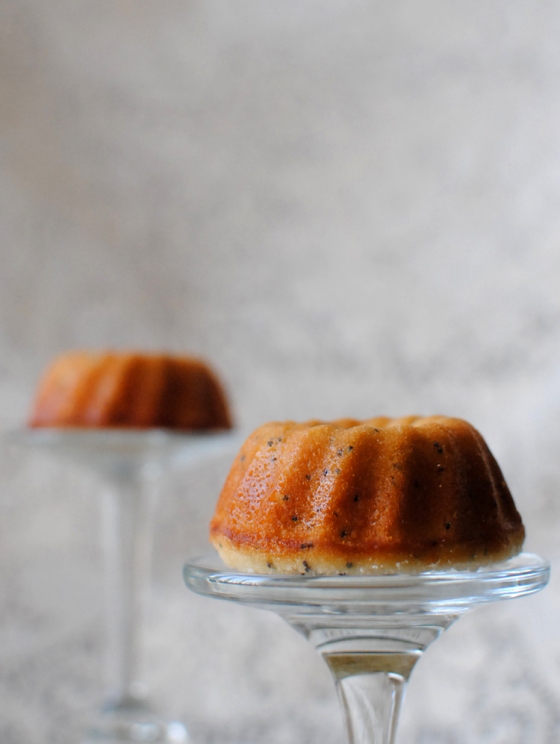 In a large mixing bowl, cream butter and sugar on medium-high speed until fluffy, 2-3 mins. Add eggs and yolk, one at a time. Reduce mixer speed to low and alternate adding in the flour mixture and the lemon juice mixture, beginning and ending with the flour. Scrape down the sides of the bowl as necessary. Gently fold in the poppyseeds.

Pour batter into the prepared pan, making sure to add roughly the same amount of batter to each cup. Bake for 18-20 mins, until a toothpick inserted into the center of the cake comes out clean. Let cakes cool in the pan for about five mins, then turn them over and allow them to cool completely on a wire rack. If cakes have rounded bottoms and are not standing up straight, gently use a serrated knife to level the bottoms of the cakes. Garnish with glaze of choice, or sprinkle tops with a dusting of powdered sugar.