The past few days have been strange. A sort of whirlwind of internal spiritual discord, an exhaustion that doesn’t seem to abate no matter how many snatches of sleep are stolen, a bone-deep discontentedness that casts a shadow over every moment. It’s not just me, either; it seems that almost everyone is victim to this emotional drainage that has swept through the program like some cruel, supernatural force. I’m not quite sure why.

Well, no, that’s a lie. I’ve spent enough time in pensive introversion these days that I could offer a laundry list of reasons. But that’s not something I want to expand upon in great detail here.

(I’m more of a think-too-much-right-before-bed-and-suffer-the-consequences-with-crippling-insomnia type of gal.)

I just finished up dinner with Çisil and Seyhan Anne on the balcony — a sauté of eggplant and tomato atop a bed of pilav, side of stewed greens and yogurt and leftover grilled chicken from the weekend — and we went through my final days in the country. It hit me then that this was going to be my last real meal at home with the two of them (tomorrow’s another evening spent cooking with sınıf 16 and M Bey, Wednesday’s a trip up to the coast for rakı–balık, Thursday’s a group dinner with the program, Friday’s a bus ride to Bandırma for the night, and Saturday is off for Atatürk Airport), and I promptly almost had a mental breakdown. 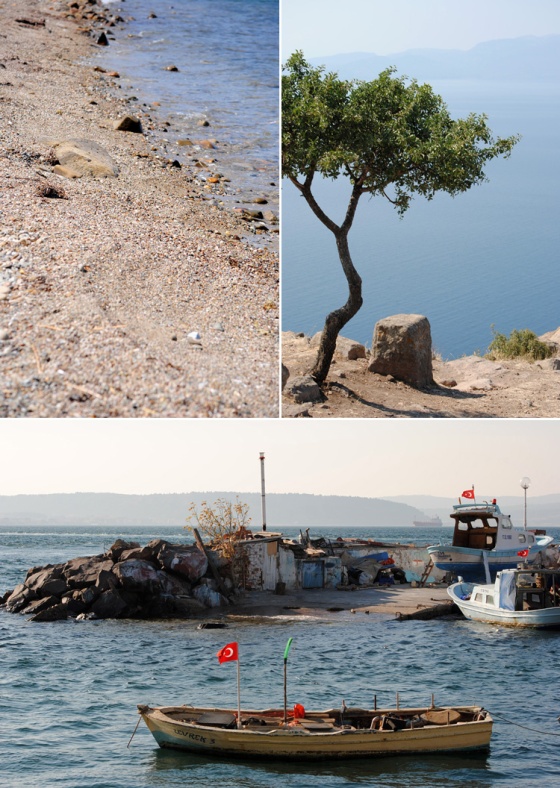 In any case, Çisil and I decided then that we are going to spend a few hours this evening at a cafe, channeling our emotional distress into furious competition over games of tavla alongside cups of Türk kahvesi and Turkish delight. Another night spent avoiding pages of Turkish homework and aggressively ignoring the language assessment exams looming later in the week. An alternative I can look forward to with a light heart.

Still, much of the emotional distress likely has to do with the fact that the weekend was spent away from Bursa, and now that I’m back I’m realizing just how few days are left, just how quickly two months have slipped through my fingers. The weekend itself was enjoyable enough; two nights spent exploring bars and cafes along the coast, dipping our feet into the cold blue of the Dardanelles with the moonlight reflecting off the shore like glass; two days spent weaving through the tombs and mausoleums of Çanakkale, climbing the ruins of Assos and seeing the world rolling out like a tapestry.

It’s incredibly beautiful and a bit profound, the great power and vulnerability that you’re capable of feeling when you stand atop a cliff overlooking everything below.

It was a 5 hour bus ride to Çanakkale from Bursa, spent in the company of language partners and frequent naps. We arrived close to sunset, meeting together for dinner at our hotel, a comfortable building sitting across from the bank of the Dardanelles. I took a stroll with a few others before dinner, sightseeing through the city center and spending unnecessary money on unnecessary clothing for a second suitcase I still have yet to purchase.

Time after dinner was spent watching the boats in the harbor shine in the moonlight, enjoying the sea breeze and catching up with friends I don’t see enough during the week. A few hours at a bar with other friends and bad decisions made about getting enough sleep rounded off a rather lovely first night to our weekend.

Saturday was spent in a less relaxing fashion than I typically expect for weekends of travel, with a bit more time sitting on a bus than getting to know the city itself, but it wasn’t unbearable. We woke early for a ferry ride across the sea, breeze wonderfully refreshing in the morning sun and a rather lovely way to spend half an hour. Upon arriving at our destination, we were rewarded with a fascinating hourlong recounting of the Gallipoli Campaign (fascinating for both the content and the subtly nationalistic manner in which the content was expressed) before seeing the Martyr’s Memorial and tombs of soldiers that died in the battles.

The entire experience was somewhat haunting.

Lunch was a distinctly contrasting experience, bringing a bit of welcomed balance to the melancholy of the morning. We ate at a lokanta with a stunning view of the sea; a simple meal of grilled chicken skewers and rice, begun with mercimek çorbası and finished with fresh cut watermelon. The mayor of the city joined us in a rather spontaneous display, sitting at the head of my table for a photo and a short exchange with us students. My three-word contribution was deeply impressive to him (as it seems to be to most Turks, much to my constant wonderment and disbelief), as he felt the need to tell me how brilliantly my Turkish is coming along before calling me “esmer güzelli”, or a “dark-skinned beauty.”

Saturday night was a repeat of Friday, though with a few hours of sleep added on to avoid the feelings of ire I harbored earlier in the day from exhaustion and Çanakkale heat. 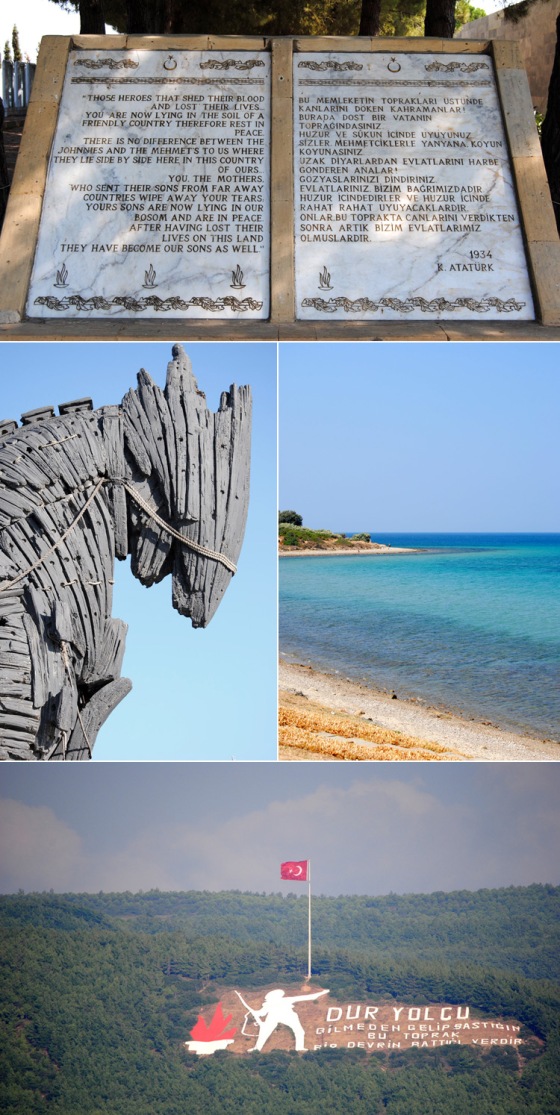 We woke early on Sunday, indulging in a buffet of Turkish breakfast before setting off for Assos (known also as Behramkale), a village I was, unsurprisingly, most excited to visit.

The main part of the city sits atop a hill overlooking the sea, ruins scattered along the cliffs in a beautifully ethereal display. In order to get there, we hiked up steep cobblestone streets lined with colorful shops and boutiques, charmingly warming and bright as we climbed. Once at the top, I found myself rather stunned into silence, seeing the ruins of the Temple of Athena with the mainland of Çanakkale behind her and the Gulf of Edremit stretching out to the horizon in front, stepping over rocks and boulders carefully and imagining the footsteps of famous thinkers in centuries past ghosting over them alongside mine.

I sat atop some of the boulders for some time — how long, I couldn’t tell you — just watching the blues and teals of the Aegean, losing myself in the waves rolling lazily below. My mind was swimming, then, with reflections of the past few months; of four years’ spent pouring over philosophical texts for a diploma in a field that has left me with more questions than answers; of seeing mum and dad and Yusra in a few short days; of moving to a new apartment in the fall for a new job, of hours to be devoted to graduate school applications and studies for the GRE; of anxieties about the future and worries that I’ll always want to be somewhere else.

Mostly, though, I realized that I’m at a place where so many things are so important, but it feels as though there is so little time to let them matter. Almost as if everything lies upon a horizon that is always in view, yet somehow unreachable.

I felt sadder then than I’d felt in a long while.

The past few days have been strange. Neither good nor bad, but both deeply empty and overwhelmingly fulfilling. Sometimes I feel as though there are too many thoughts to be contained in minds so finite. Perhaps that’s why we are constantly told not to think too hard upon them.

And you know, I think that’s advice I’ll take for my last week here.

This recipe is a nod back to last week’s cooking session. Not very relevant to a weekend in Çanakkale and parkour atop ancient ruins, but a dish I think would pair quite nicely with a view of the Aegean.

(Or, lacking the sea, a few good friends and a no-stress evening of lazy conversation will suffice.) 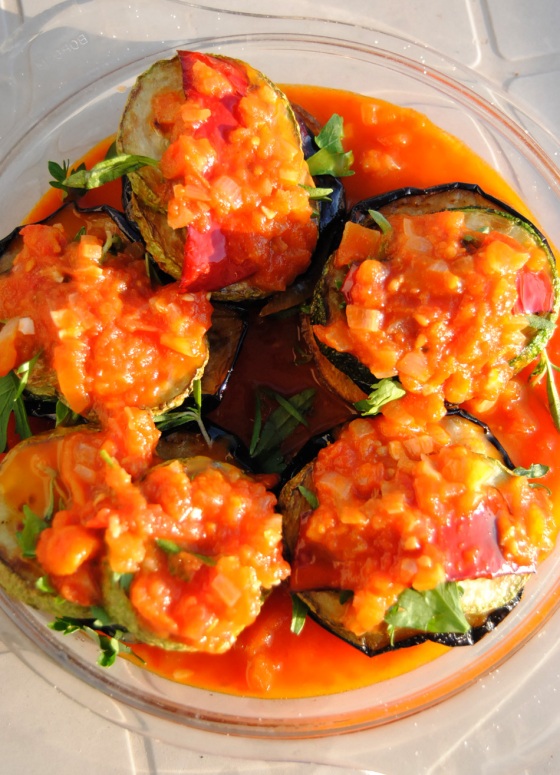 Majorcan Tumbet
Adapted from Honest Cooking
Serves 6 as a side

Slice the eggplants (without peeling them) into 1/2-inch rounds. Lay on a colander or in a baking dish and generously sprinkle with salt. Leave for at least an hour, so eggplants release their bitter juice.

Heat olive oil in a large pan over medium flame. Slice the potatoes into 1/2-inch rounds and fry, turning over a few times, until golden-brown on both sides.

Once eggplants have released moisture, pat them dry with paper towels. Fry eggplants until browned and repeat as before.

Preheat oven to 350F. Pour a few spoonfuls of tomato sauce over the base of a large oven dish. Begin stacking the fried vegetables (potato, eggplant, zucchini, squash, red bell pepper) in the dish, alternating with a few herb leaves and a sprinkling of salt and pepper in between layers. Top the stacks with more of the tomato sauce. Bake for 15 minutes. Serve immediately, with a few fresh herbs sprinkled on top as garnish.

Blanch tomatoes by heating a large pot of water until boiling. Plunge tomatoes into boiling water and let heat for 45 seconds to a minute. Drain them. As soon as they are cool enough to handle, skin them and chop into coarse pieces.

Melt butter in a medium pot over medium flame. Add onion and fry until translucent. Add garlic and stir until lightly browned. Add tomatoes and a teaspoon of salt. Reduce heat to low and allow tomatoes to simmer, uncovered, for about 45 mins. Stir from time to time, breaking up any large pieces of tomato with the back of a wooden spoon. Taste and correct for salt.